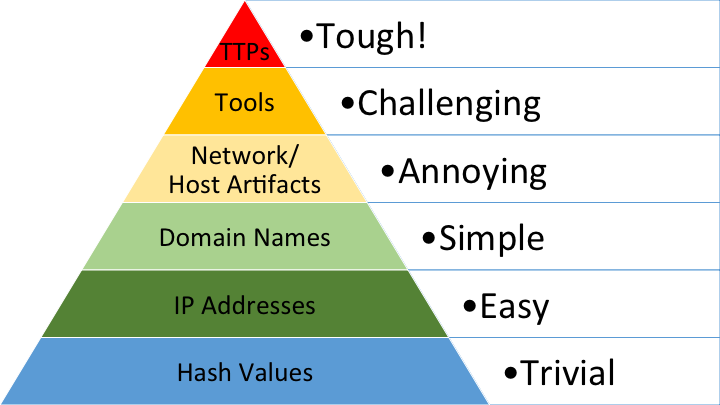 Update 2014-01-17
I’m updating this post to include a slightly revised version of the Pyramid.  The only real change I made was that I added a new level for hashes.  I also updated the text to account for this.

On February 18th, Mandiant put a major hole in the APT intelligence dam when they released their APT1 report profiling a group commonly referred to as Comment Crew.  There followed a small flood of reports from other entities like the Symantec (and this) and the DHS/FBI.  Most of the furor over the APT1 report was regarding it’s findings suggesting that APT1 is actually the PLA’s Unit 61398.  This is solid work, and a real breakthrough in the public policy area, but I was a lot more excited about the detailed technical information included in the reports’ seven appendices (not including the video appendix).

After seeing how these indicators were being applied, though, I came to realize something very interesting: almost no one is using them effectively.
I put that statement in bold, because it’s a little bit of a challenge, and I’m sure it will surprise many readers.  The entire point of detecting indicators is to respond to them, and once you can respond to them quickly enough, you have denied the adversary the use of those indicators when they are attacking you. Not all indicators are created equal, though, and some of them are far more valuable than others.

The Pyramid of Pain

To illustrate this concept, I have created what I like to call the Pyramid of Pain.  This simple diagram shows the relationship between the types of indicators you might use to detect an adversary’s activities and how much pain it will cause them when you are able to deny those indicators to them.  Let’s examine this diagram in more detail.

Let’s start by simply defining types of indicators make up the pyramid:

Now that we have a better idea what each of the indicator types are, let’s take a look at the pyramid again. The widest part of the pyramid is colored green, and the pinnacle of the pyramid is red.  Both the width and the color are very important in understanding the value of these types of indicators.

Most hash algorithms compute a message digest of the entire input and output a fixed length hash that is unique to the given input.  In other words, if the contents of two files varies even by a single bit, the resultant hash values of the two files are entirely different.  SHA1 and MD5 are the two most common examples of this type of hash.
On the one hand, hash indicators are the most accurate type of indicator you could hope for.  The odds of two different files having the same hash values are so low, you can almost discount this possibility altogether. On the other hand, any change to a file, even an inconsequential one like flipping a bit in an unused resource or adding a null to the end, results in a completely different and unrelated hash value.  It is so easy for hash values to change, and there are so many of them around, that in many cases it may not even be worth tracking them.
You may also encounter so-called fuzzy hashes, which attempt to solve this problem by computing hash values that take into account similarities in the input.  In other words, two files with only minor or moderate differences would have fuzzy hash values that are substantially similar, allowing an investigator to note a possible relationship between them.  Ssdeep is an example of a tool commonly used to compute fuzzy hashes.  Even though these are still hash values, they probably fit better at the “Tools” level of the Pyramid than here, because they are more resistant to change and manipulation.  In fact, the most common use for them in DFIR is to identify variants of known tools or malware, in an attempt to try to rectify the shortcomings of more static hashes.

IP addresses are quite literally the most fundamental indicator.  Short of data copied from local hard drive and leaving the front door on a USB key, you pretty much have to have an network connection of some sort in order to carry out an attack, and a connection means IP Addresses.  It’s at the widest part of the pyramid because there are just so many of them.  Any reasonably advanced adversary can change IP addresses whenever it suits them, with very little effort.  In some cases, if they are using a anonymous proxy service like Tor or something similar, they may change IPs quite frequently and never even notice or care.  That’s why IP Addesses are green in the pyramid.  If you deny the adversary the use of one of their IPs, they can usually recover without even breaking stride.

One step higher on the pyramid, we have Domain Names (still green, but lighter).  These are slightly more of a pain to change, because in order to work, they must be registered, paid for (even if with stolen funds) and hosted somewhere.  That said, there are a large number of DNS providers out there with lax registration standards (many of them free), so in practice it’s not too hard to change domains.  New domains may take anywhere up to a day or two to be visible throughout the Internet, though, so these are slightly harder to change than just IP addresses.

Smack in the middle of the pyramid and starting to get into the yellow zone, we have the Network and Host Artifacts.  This is the level, at last, where you start to have some negative impact on the adversary.  When you can detect and respond to indicators at this level, you cause the attacker to go back to their lab and reconfigure and/or recompile their tools.  A great example would be when you find that the attacker’s HTTP recon tool uses a distinctive User-Agent string when searching your web content (off by one space or semicolon, for example.  Or maybe they just put their name.  Don’t laugh.  This happens!).  If you block any requests which present this User-Agent, you force them to go back and spend some time a) figuring out how you detected their recon tool, and b) fixing it.  Sure, the fix may be trivial, but at least they had to expend some effort to identify and overcome the obstacle you threw in front of them.

The next level is labelled “Tools” and is definitely yellow.  At this level, we are taking away the adversary’s ability to use one or more specific arrows in their quiver.  Most likely this happens because we just got so good at detecting the artifacts of their tool in so many different ways that they gave up and had to either find or create a new tool for the same purpose.  This is a big win for you, because they have to invest time in research (find an existing tool that has the same capabilities), development (create a new tool if they are able) and training (figure out how to use the tool and become proficient with it).  You just cost them some real time, especially if you are able to do this across several of their tools.

Some examples of tool indicators might include AV or Yara signatures, if they are able to find variations of the same files even with moderate changes.  Network aware tools with a distinctive communication protocol may also fit in this level, where changing the protocol would require substantial rewrites to the original tool.  Also, as discussed above, fuzzy hashes would probably fall into this level.

Finally, at the apex are the TTPs.  When you detect and respond at this level, you are operating directly on adversary behaviors, not against their tools.  For example, you are detecting Pass-the-Hash attacks themselves (perhaps by inspecting Windows logs) rather than the tools they use to carry out those attacks.  From a pure effectiveness standpoint, this level is your ideal.  If you are able to respond to adversary TTPs quickly enough, you force them to do the most time-consuming thing possible: learn new behaviors.
Let’s think about that some more.  If you carry this to the logical extreme, what happens when you are able to do this across a wide variety of the adversary’s different TTPs?  You give them one of two options:
If I were the adversary, Option #1 would probably look pretty attractive to me in this situation.

Effective Use of APT1 Indicators

Now that we’ve covered all that background, we can finally turn our attention back to the APT1 indicators.  I said that almost no one was making effective use of them.  What did I mean by that, and what constitutes “effective use”?
What I meant was that I see a lot of discussion about the long list of domain names included in Appendix D (and to a lesser extent, the domains and IPs included in the DHS/FBI and Symantec reports as well).  Seth Hall of the Bro-IDS project even put out a neat Bro module that you could use to search for those domains in your network traffic.
This is all good and proper, but I haven’t seen a lot of discussion centering around the data they provided on the behavior of the Comment Crew tools themselves.  Appendix A is a giant data dump of some very good information regarding host and network artifacts for 40+ tools known to be in use by this group.
Emerging Threats has published a set of Snort signatures that cover many of these, and I’m quite sure many of us have produced our own, but I find the lack of attention to these curious.  Maybe the ET rules are already serving everyone’s  needs and so there’s no need to talk about them?  More likely, though, I think a lot of organizations have not properly reviewed the reports for detection indicators.
Whenever you receive new intel on an adversary (whether it be APT1/Comment Crew or any other threat actor), review it carefully against the Pyramid of Pain.  For every paragraph, ask yourself “Is there anything here I can use to detect the adversary’s activity, and where does this fall on the pyramid?”  Sure, take all those domains and IPs and make use of them if you can, but keep in mind that the amount of pain you cause an adversary depends on the types of indicators you are able to make use of, and create your plan accordingly.

Avecto shortlisted for Business of the Year